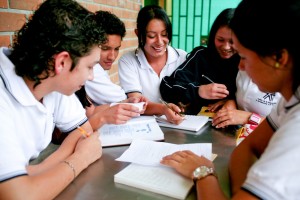 EU support to Higher Education contributes to building the EU-LA Common Higher Education Area objective (set out for the first time by the Heads of State and Government of EU-LAC through the Declaration of Guadalajara in 2004, and reiterated during the successive EU-LAC Summits) is recognised as a strategic element for strengthening bilateral and multilateral relations between the two regions. Higher education institutions (HEIs) play a leading role as a driver of socio-economic development to overcome social inequality in Latin America by improving the quality of national education systems.

We have written an entire proposal for such specific call on Supporting Higher Education in Latin America, and would like to submit under ERASMUS+ (call details to be published later this year, but to be submitted most likely in January-February 2018).

We are looking for:

All other partners are already in place.

You can send your expressions of interest to info[@]phoenixkm.eu for the attention of Karel Van Isacker, no later than end of June 2017, together with a completed PIF document. We will only consider the reactions that are accompanied with such completed form.

As part of our involvement in the STeP project, we offer free access to the strategic entrepreneurship training platform. You can subscribe here for the course (available also in Dutch with Dutch audio). STeP targets to develop an innovative and integrated online training programme and platform on Strategic Development, ensuring vocational education for stakeholders of SMEs throughout all sectoral activities via newest learning methods.

By continuing to use the site, you agree to the use of cookies. more information